An art dealer accused of murder. A notorious criminal on a desperate hunt for diamonds. An imposing house with many twisted tales to tell. What is the connection between them?

December 1923: After returning a stolen artifact to New Guinea, Jack and Bea Collingwood arrive in cinematic Sydney, Australia, for what they hope will be a restful stay with their friends Dr. Miller and his wife, world-renowned spiritualist and medium Madame de Clermont. However, the imposing house on Jacaranda Street, where the four friends enjoy their reunion, holds many dark secrets that will force Jack to question his sanity.

When the house is broken into one night, and a woman’s body is found in Hyde Park, Jack finds himself reluctantly working with the New South Wales police to solve a cold case murder involving a local art dealer with a murky past. Jack is introduced to Sydney’s seedy underworld and discovers the city’s most notorious gang leader is convinced diamonds are hidden somewhere in the house and he'll do anything to lay his hands on them, including threatening Bea Collingwood. As the incidents escalate, Jack learns the history of a family torn apart by rivalry and the pursuit of wealth, and that everything centers around the house on Jacaranda Street and the mysterious woman Jack keeps seeing in an upper-level window.

Who is this woman, and what is the story she is so desperate to tell? Can Jack unravel the past and find out what really happened on a fateful day in January 1914? After all, the truth cannot be buried forever.

“On Jacaranda Street” is a story of adventure and mystery that drew me in from the first page to the last. I was totally captivated. Martins ability to create heartfelt characters of human, spirit, and animal form; to provide settings of historical and geographical worth; and, to build engagement with intricacy of plot, result in a novel of beauty and intrigue. Upon finishing the final chapter I was spellbound and continued to ponder the happenings within the story for quite some time. I marvel at the depth of research and creativity offered by Martins to weave such a tale of mystery and enchantment. I highly recommend this gothic ghost story. MAYBE SOME PHOTOGRAPHS SHOULD NOT BE TAKEN

Lieutenant Jack Collingwood, haunted by the ghosts of war and his brother's death, recuperates at Ashgrove Park, a stately Sussex manor.

Unsettling things have been happening there since relic hunter Lord Ashgrove returned from British New Guinea after having stolen a shaman's skull for his collection of curiosities.

The American spiritualist and medium, Madame de Clermont, is on tour in England and staying with a relative in nearby Oaks Green. She asks Jack to take photographs during her séance. The spirit images he develops reveals the shocking extent of the curse unleashed on Lord Ashgrove’s family.

While Jack faces the secrets of his troubled past and doubts his sanity, he must solve a series of mysterious deaths and disappearances before Lady Beatrice Ashgrove–the woman he loves–is threatened.

Can he save her, or will he succumb to the powerful force that walks the halls of Ashgrove Park?

Lieutenant Jack Collingwood is recuperating at Ashgrove Park following the death of his brother and is trying to adjust to life after the trenches of World War I. He keeps seeing visions, is it really his dead brother or is Jack going mad? I really loved this book, the clues peppered along the way kept me guessing, the good pace of introducing characters like Lady Beatrice and the American spiritualist and the clever way the story all pulls together in the end. It's Downton Abbey meets Anzacs and the spirit world I can’t wait to see what happens to Jack in book two. He’s a political exile. She’s part of the Italian resistance. Together they will face the ruthlessness of war. Rome, 1943 – Carlo Moretti’s life changes forever when he is sent into exile to a remote Italian village. As a political student, Carlo opposes Mussolini’s Fascist government, but he loses everything and finds himself in a world that time has forgotten and where superstition still has a hold. Carlo joins the local resistance, and as German troops march into the village and an SS officer takes command, he risks his life for the woman he loves and discovers the unexpected friendship of a priest and an Allied prisoner of war. But Carlo must learn not everyone can be trusted. Where Sunflowers Grow is a story about what it takes to survive in war-torn Italy and is told through 56 vignettes.

For those of us who enjoy historical fiction, this one is a gem. I read Where the Sunflowers Grow in a couple of sittings and found it hard to put down. Beautifully written, the book unfolds into an impoverished Italy during its World War II era travails, from homegrown fascism to Nazi occupation and beyond. It’s chock full of historical details that make you feel you are there. You will root for the main characters each step of the way, while hoping justice is swiftly delivered to the rotten eggs. From nail biter to romance, this tale has it all. 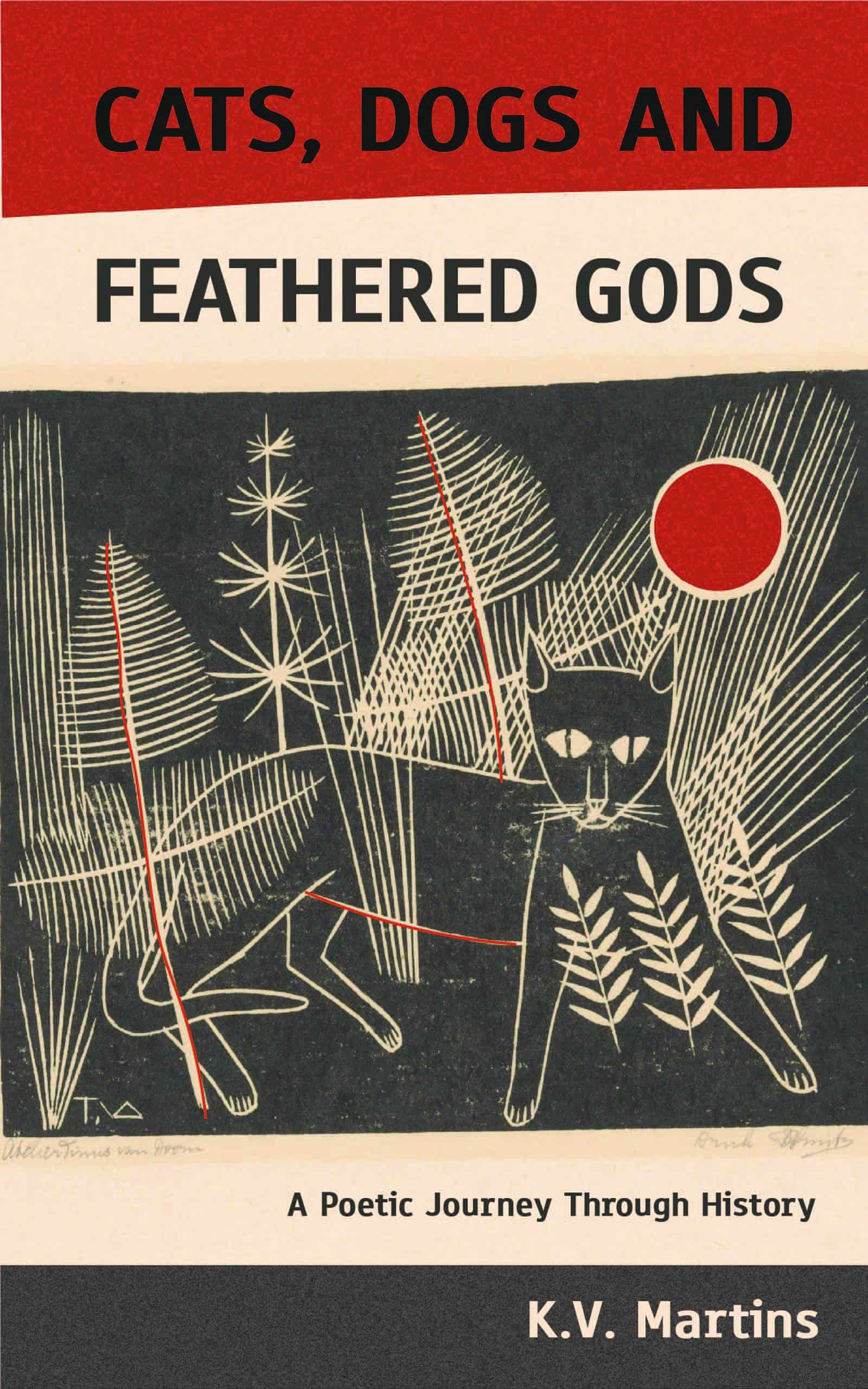 Find yourself sailing on a Portuguese galleon bound for Lisbon, watch the ancient library of Alexandria burn, and discover who could be trusted in ancient Egypt. This collection of forty-eight poems will take you on a journey through the cloth markets of Constantinople, to Helen's Troy and the steppes of Mongolia. Along the way, you will meet Leonardo da Vinci, Rene Descartes, Charles Darwin, Albrecht Durer, as well as the cats, dogs, and feathered gods of the ancient world.

I have just re-read Cats, Dogs and Feathered Gods - truly wonderful dip into the arc of our civilization - bravo!

Get your free exclusive Behind the Scenes with K.V. Martins. Behind the Scenes gives extra details about each book. Which characters are real-life? What's the recipe for the best caramel sauce to go with an Italian sponge cake? What are the author's three favourite novellas? And more!

Subscribe and get your special bonus in your inbox.